A modern runtime for JavaScript and TypeScript.

Blazing fast linter for JavaScript and TypeScript written in Rust

The matter is somewhat urgent, please consider escalating it. Thanks in advance!

Last week I was able to reproduce the slowdowns but I can't anymore. Can you still reproduce this?

So how does one configure use of socks proxy? It doesn't seem to work with just HTTPS_PROXY do I also need SOCKS_PROXY ? I don't see it in the docs.

Just another update (mostly to keep the git bot from marking this stale 😅). This appears to still be broken in deno 1.30.0

I have an existing application that depends on Node's AsyncLocalStorage to run properly and Deno doesn't support it yet in the compatibility mode. So this is a feature request for that.

It has only two methods that are not marked as "experimental", I think the policy would be to implement only those:

I'm willing to contribute an implementation for that myself, but before I would like to ask if there is any existing machinery to track async contexts? Does Deno have some equivalent?

AsyncLocalStorage is now supported in both Deno CLI and Deno Deploy, as of std@0.175.0.

Yes blog is on Deno Deploy at https://smote.io. The repo is available at https://github.dev/willpuckett/smote.

I modified the deno_blog source code to produce some timing information by chaining the loadContent() function in blog.tsx to the following:

It runs very quickly on my local machine, but the timing on Deno Deploy takes much longer. Here's a sample:

Did you figure out the segfault on LowMemoryNotification?

No, still trying to come up with a reproducible way to trigger the segfault.

If you insist. Does this look good?

Did you figure out the segfault on LowMemoryNotification?

Duplicate of https://github.com/denoland/deno_std/issues/2667 and I believe at least one other issue I remember seeing a while ago but I can't seem to find it.

In addition to the previously provided answer, the specific error you are getting is regarding writing to disk, which is not possible on deploy.

Locally, the script works without any problems. When I upload it globally, I get a permission error. 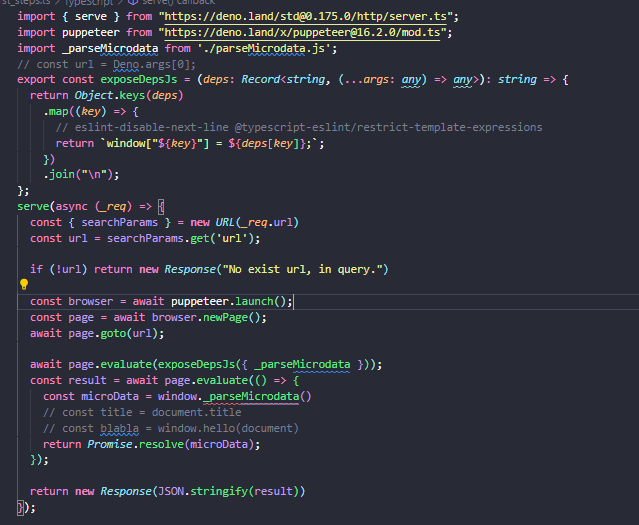 A few things that make this infeasible afaik:

Created at 5 hours ago